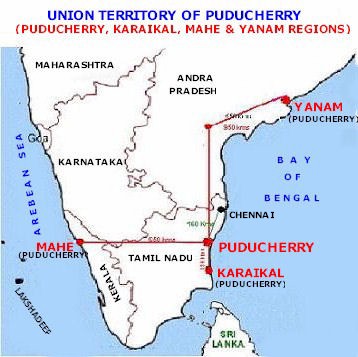 Puducherry region, which is the largest of all the four, lies on the east-coast, consisting of 12 scattered areas, surrounded by the State of Tamil Nadu and by the Bay of Bengal on the east. It is located around 150 Kms south of Chennai.

Mahe region is located at about 653 Kms west of Puducherry, on the west-coast near Tellicherry in Kerala.

Yanam region is located at about 840 Kms north east of Puducherry, on the east-coast near Kakinada in Andhra Pradesh.

The Union Territory has semi-arid type of climate, with a mean annual temperature of around 30° C and 70-85% relative humidity, is prevalent in the Union Territory. While Puducherry, Karaikal and Yanam region receive rain mostly through North - East monsoon, Mahe region benefits from the South-West monsoon.